Leon at African Bush Backpackers told us about Manyeleti and recommended it as a good place to spent a couple of days. It’s just west of Kruger’s Orpen Gate, but can also be accessed from the south via the R40 and some side roads. Our host at Hippo Waterfront Lodge recommended that we avoid the R538 between White River and Hazyview as it’s busy,  may have a lot of livestock wandering across the road and can take long time to drive a short distance . We’ve learnt to listen to advice from locals!

After we left Marloth Park, we spent a night at Panorama Rest Camp, a lovely campground near Graskop. It had a horizon pool overlooking the kloof gorge, good facilities including coin-operated washing machines and dryers (which we made very good use of) AND beautiful azalea hedges that were in flower when we visited. Some were 3+ metres high! We were planning on driving north to Blyde River Canyon, then to Manyeleti, but when we got up the next morning it was so foggy we could barely see a car length in front of us. So going sightseeing seemed a bit pointless, and we’ll add Blyde River to our ‘to do’ list.

We crawled down the R533 and heaved a quiet sigh of relief when we were low enough to be able to see a decent distance in front. Headed north on the R40 to Acornhoek where we stopped at a shopping mall and stretched our legs and met a very dapper Car Guard … bow tie, shiny shoes and a lovely man. When we got back to Clancy, he was standing close by, talking to a young Austrian woman. She took a photo of us with the guard, his son and his son’s friend.

Then along the R531 to Orpin Gate. The entrance to Manyeleti is on the right, just before the gate. We paid the day fee of R55 per person, got a map of the reserve and drove south to Main Camp. Manyeleti Gate is about 4kms south of Main Camp.

There are several private lodges/tented camps/other accommodation in the Reserve in addition to Main Camp, which offers cabins, rondevals, campsites and Senate, a tented camp area. We parked Clancy on one of the campsites, which is a large area with a cold water sink, braai and paved area. Ablutions nearby were okay and people staying at Senate share those. We paid R250 per campsite per night  – they charge per campsite, not per person. We only paid the day fee for our first day there.

The day we arrived, we went on an afternoon game drive, being very mindful that the camp’s gate closes at 6pm. Saw a huge herd of cape buffalo and wildebeest, antelopes, a couple of elephants. Next day we went out earlier in the afternoon and found a big group of elephants in some scrub. Largest group we’ve seen! There were 4 or 5 babies including one very tiny one, and I guess the rest of the females are pregnant. They weren’t too bothered by us, or rather, by Clancy, and we sat and watched them for ages.

Poor Clancy has had a bit of radiator trouble, a small leak, nothing too serious, but we’ll be bringing a replacement radiator to add to the spare parts collection. Greg bought a bottle of Bars Leaks when we were in Malalane, just out of Marloth Park, so he added  the contents to the radiator …. problem solved. Magic stuff.

We spent our second-last night at Elangeni Holiday Resort, just off the N4 west of Nelspruit, then drove the 250ish kms back to Joburg to the place where we store Clancy and camp when we’re here.

Or: A Series of Very Fortunate Events

I’m sure that we will both remember our day with Lilli and Christa as one of the highlights of this trip.

Christa lives in Marloth Park and Lilli has been staying with her for the last week or so, having a break from camping, enjoying some home comforts and making a lifelong friend. We visited them at Christa’s on Thursday morning and spent several hours swapping stories and getting to know more about each other.

Christa’s place is a beautiful bush haven and she has so much wildife on her doorstep, it’s incredible. At this time of the year, before the rains start, getting enough to eat is very hard for herbivores, so she feeds them pellets which are approved by wildlife experts. They smell like grass, and probably have added extra goodies in them too. Many of the animals come right up to Christa’s back verandah and she hand-feeds some of them. The smaller antelopes are shy and hang back, but some of the larger varieties can become very friendly when there’s food involved!

Christa invited us back later in the afternoon to have ‘sundowners’ overlooking Crocodile River and Kruger, then back to her place for a braai. Fantastic, we’d love to! The previous day, they had seen some lions across the river, so we were hopeful that we might see some too. Christa belongs to a local Whatsapp wildlife spotting group that shares information about what is where. No messages that afternoon and we didn’t get to see any lions, but it was lovely to sit with our drinks and snacks and watch the sun go down. On our way back to Christa’s, we saw giraffes, and then so many different animals visited the back verandah, I’m sure I won’t remember them all. At one stage there were 4 different types of antelope there all at once. I even hand-fed a young Nyala buck! He’s the only one in Marloth Park and likes to hang out with the Impala girls. We  saw tiny bushbabies, zebras, a genet (small nocturnal cat that we had never seen before), and warthogs which Christa chases away as they are already fat and don’t need extra feeding. She makes a noise like a leopard and the warthogs run away!

We shared a lovely braai, more stories and left feeling like we now have 2 more like-minded friends. Lucky us!

I left a bag there and we had to go back and collect it the next morning. As we were leaving, Christa had a message from her Whatsapp group, letting people know that there had been a lion kill near the lookout. We had been there the day before, so headed back there to find a large crowd looking across the river at a group of 5 lions lying on some sand in the shade. Earlier in the morning, the lions had killed a kudu right on the fenceline separating Kruger from Marloth Park. The electric fence was wrecked and the dead kudu was lying just on the Kruger side. Because of the cars and people, the lions had gone back across the river, but would return to the kudu later. And then the scavengers would come when the lions had finished.

I am beginning to think that Greg and I are the opposite of lion whisperers – we just don’t have much luck seeing lions. The day after our sundowners with Lilli and Christa, they saw 7 lions! 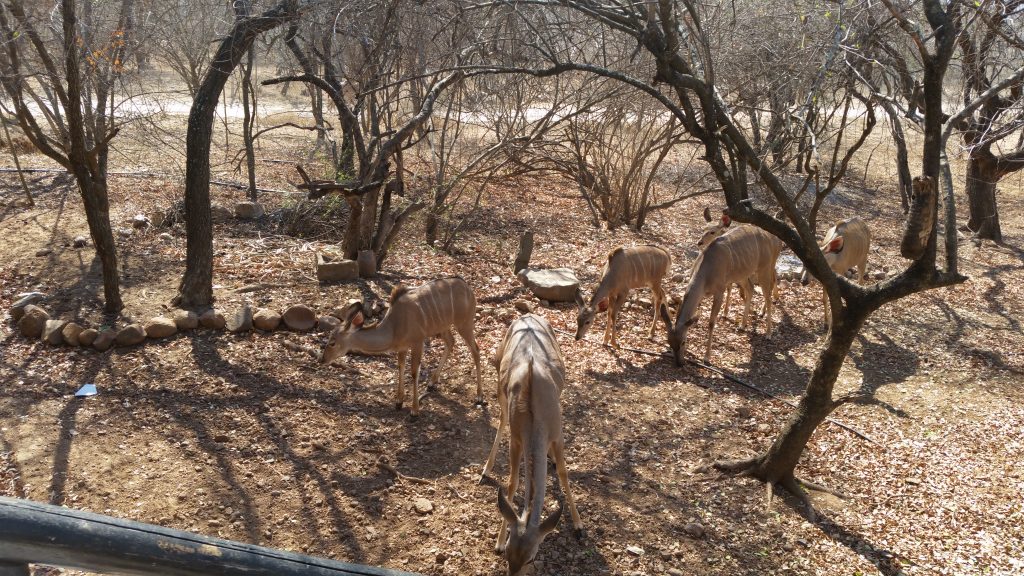 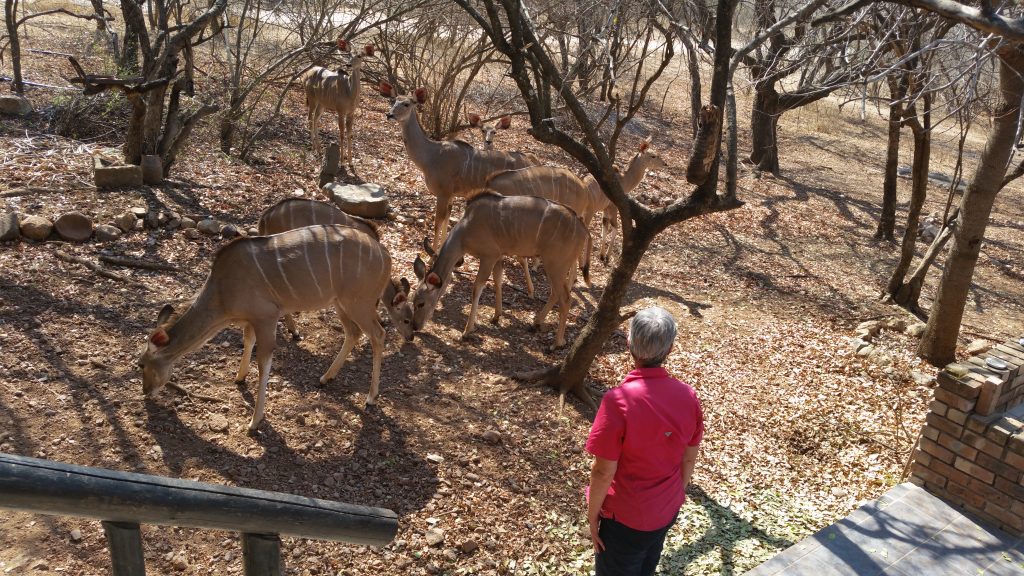 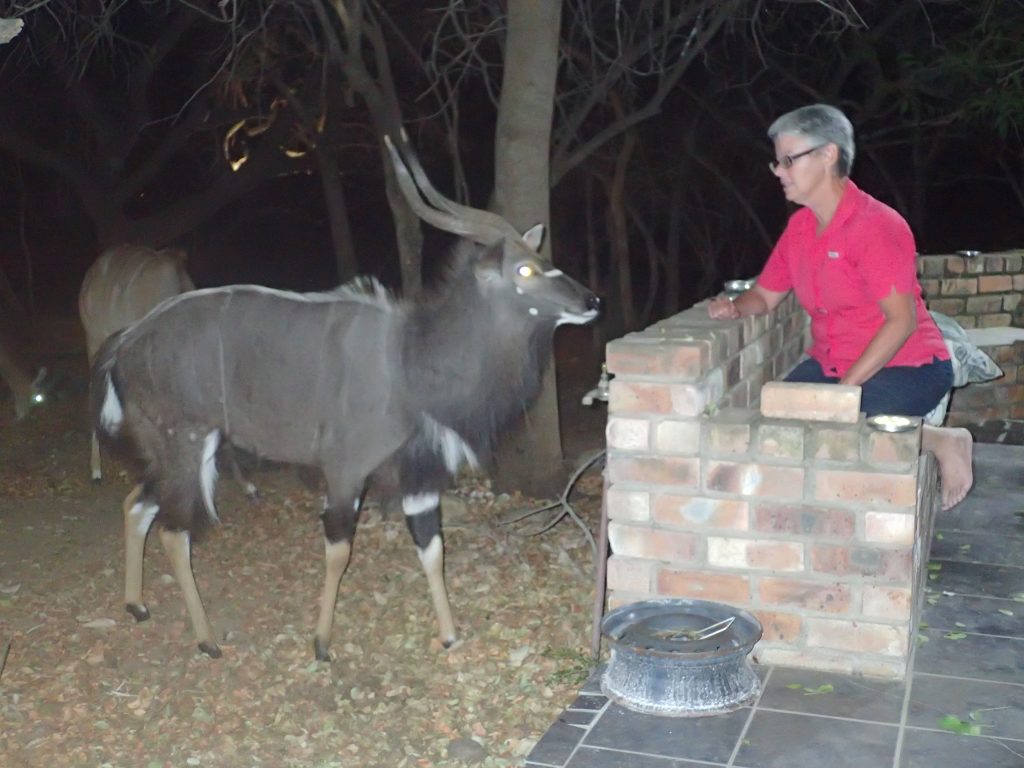