For a short while on Friday we thought we’d stepped several, or many, millenia back in time.

We spent a few days driving south of Namibe, going to see the Tchitundo-Hulo petroglyphs and rock paintings. It’s not easy to get information on how to find them (and anyone reading this post hoping for clarification will probably be very disappointed … sorry!) but we had some GPS coordinates and a description from an iOverlander post, so we thought we’d give it a crack.

On our second night in the Namibe desert we were treated to a spectacular silent lightning show, predominantly over the largest mountain to the east of where we were camped. We sat and watched it light up the hills and mountains far away in the east, gradually swinging around to the south and west. It felt as special to us as watching the Northern Lights in Sweden, possibly even more-so as it’s taken us a lot more effort to get here! Later in the night we got rain, but no thunderstorm. We had rain for the 4 nights we camped in the desert, and started putting out containers to collect the rain which we could then use to augment our own stored water for washing up and showers. The lids of our storage boxes make good water collectors, so they all get put outside too.

On Friday morning we set off south towards the petroglyphs, turning left at an ‘intersection’ (ie, the point where 2 single dirt tracks met) at the abandoned buildings at Capolopopo. Our Bradt Angola guidebook just said that the Tchitundo-Hulo are impossible to find without a guide and possibly a local tribesman. No idea how one would actually find a guide, but we did meet up with some local tribesmen at the rock.

So, down a single lane sand track, heeding the advice of the iOverlander post to approach the rocks from the north east, but that track seemed to be taking us away from the rocks. Back to an intersection and onto the right-hand track …. which eventually petered out.

So we channeled some Aussie adventurers – Reg and Griselda Sprigg, Jack Absolom, Len Beadell, the Leyland Brothers, Malcolm Douglas, Russel Coight are a few who come to mind – and just made our own track! If I made anyone smile with that last reference …. I’ll be here all week, folks! Sometimes we would both get out and walk for a while to find the best, most open path, at other times I would walk it and point out the way, but for most of it we drove it slowly together, figuring it out as we went along. It was a new experience for us both, even Mr Adventure hadn’t bashed out his own track before.

I know what you’re thinking – are these people completely insane, bush bashing their way through a country that is still riddled with landmines? Well, this little corner of Angola is possibly the least-populated part of the entire continent, with fewer than 10 people per square kilometre, and it wasn’t landmined as there was nothing there to defend. The local people are herdsmen and there was a lot of evidence of cattle and goats in the area, together with human footprints so we were sure we were safe to proceed.

Just to the north of the rock, which is as sacred to the Mucuisses people as Australia’s Uluru is to its traditional owners, there is an abandoned ‘village’. That’s not the right term as this collection of huts inside a thorny fence would only have been ‘home’ to one family. I’m going to call it a ‘family compound’, with apologies to anthropologists if my terminology is incorrect. Later on we met some locals when we got closer to The Rock and their compounds are closer to The Rock than the abandoned one was, but we thought it had probably been home to one of the groups we met.

We parked Clancy on the western side of the rock and walked north. There were a few petroglyphs nearby, but according to the GPS info we had, the majority were on the eastern side, so we set off walking. We found more on the north eastern side, and noticed where parts of thin top red layer of the rock had sheared off. These petroglyphs are very fragile and other people have mentioned that it’s hard to avoid walking on some of them. Most of the ones we saw were circles with crosses, concentric circles and ‘suns’ – circles with lines around the outside. We didn’t see heaps of them, which were apparently further up the rocky slope. I’d been hopeful that maybe we could walk around the whole rock but, like Uluru, its circumference is large and we couldn’t really get a good idea of how big it was or how long it would take. We did walk a few kms around it, but as the afternoon was getting on, we decided to retrace our steps and head back to Clancy.

On Friday night we camped near some big rocks, just off the main track to and from Tchitundo-Hulo. We could see it to the south of us. Lovely thunderstorm that night and we collected enough rainwater so that we just had to add a bit more for showers the next morning, and I even washed my hair!

Greg read up all the info he had about finding the elusive proper track to Tchitundo-Hulo, so on Saturday morning we drove back down the first track we’d originally thought was heading too far to the east. The whole time we were in the area, we kept on thinking we’d find the right track to the rock and wonder how on earth we’d missed it, but … well … we never did. We came to a wide dry sandy riverbed that had a concrete trough nearby, and we saw a woman and small child carrying water, running back to their home. The woman was carrying a full open 20L container on her head, the child carried a smaller container in his or her arms and I felt bad that we’d made them run and spill some of their precious water.
The riverbed had lots of branches piled along the bank nearest us, suggesting that someone had had difficulty getting through either the soft sand or maybe mud. So we turned around and headed towards another significant landmark in the area – the giant Welwitschia Mirabilis, reputed to be the largest in the world. 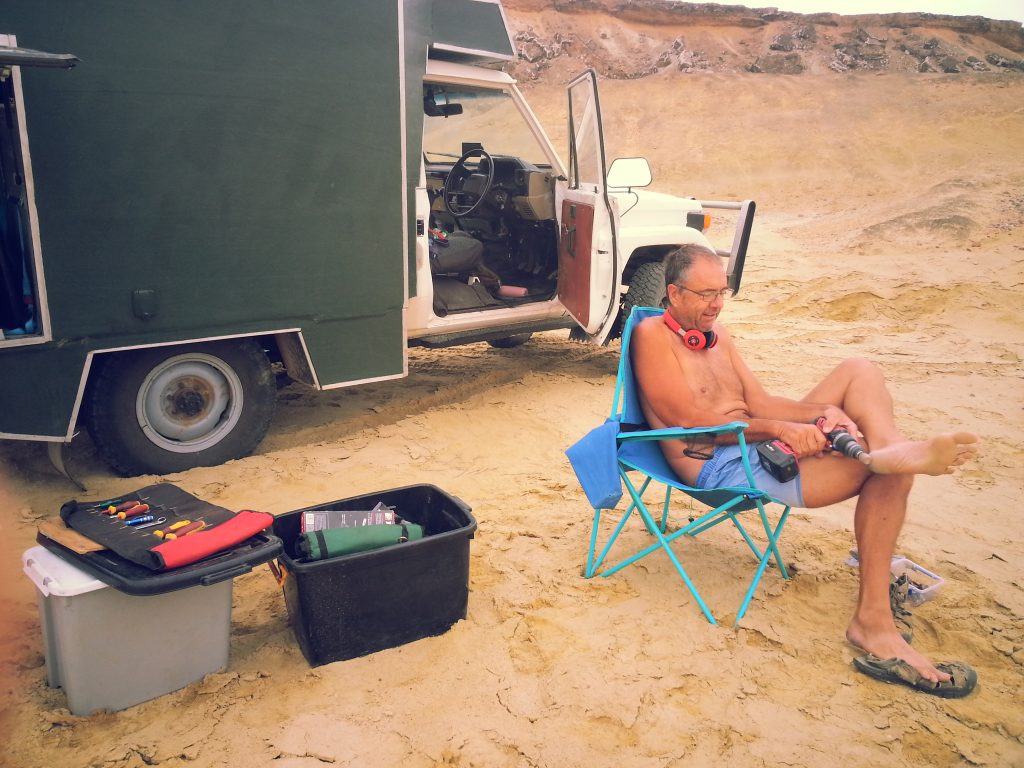 One thought on “Tchitundo-Hulo Prehistoric Rock Paintings and Petroglyphs”