We’ve spent the last 5 nights camping in and around the Kgalagardi Trans-Frontier Park and the adjoining Wildlife Management Areas.

Friday – quarry just south of the Wildlife Management Area next to the KTFP, south of Mabuasehube Gate
Saturday – camping area just inside Mabuasehube Gate. We tried to get a campsite at Khiding, further inside the park, but there were no vacancies. Allegedly. We’ve mentioned/complained about the crazy, fragmented booking systems for National Parks and Wildlife Reserves in Bots before, and it’s no better. The people at the entry gates to the parks have no idea if or where there are vacancies, but if you don’t have accommodation booked inside the park, you can’t get in. There are 3 campsites at Mabuasehube Gate, and we apparently got the last vacant site, but one of the 3 sites was unoccupied the whole time we were there. I’m sure it would be a similar story at all the campgrounds inside the park as well. People book, don’t need to pay until they are at the entrance gate, don’t show up and someone else misses out.
Sunday and Monday – Jacks Pan, north of the KTFP north-east corner. We met a South African couple, Quentin and Natasha, here and had a lovely time swapping stories. They love Botswana as much as we do and spend as much of their spare time here as they can. The night before we arrived at Jack’s Pan, they had a horrible night with a group of loud, rude campers who got drunk, played loud music almost all night and were nasty when Natasha asked them to quieten down. I can imagine how they must have felt when they heard and saw Clancy approaching their little haven. When we first met them, we assured them that we are quiet, don’t play music, don’t drink much and keep ‘campers hours’ – in bed early, sleep at least 12 hours. And we kept a reasonable distance between our campsite and theirs. On Sunday night, we heard a lion roar several times quite close to our campsite. The next morning, we chatted with Quentin and Natasha and they had seen the lion amble past their campsite just after sunset and head towards the pan. They lost sight of him then, but tracked his footprints in the morning and realised that he had been lying on the vehicle track at the edge on the pan, and that’s when he started roaring. Apparently there are 2 lions who live in the area – this big one and his smaller brother. We stayed here on Monday night and didn’t see or hear him again, unfortunately. We spent about an hour sitting in the car just after sunset, in case he walked the same way as he’d done on Sunday.
Tuesday – Peach Pan, north of the KTFP

We’re on our way to Hukuntsi now, and plan to get to Ghanzi tomorrow. 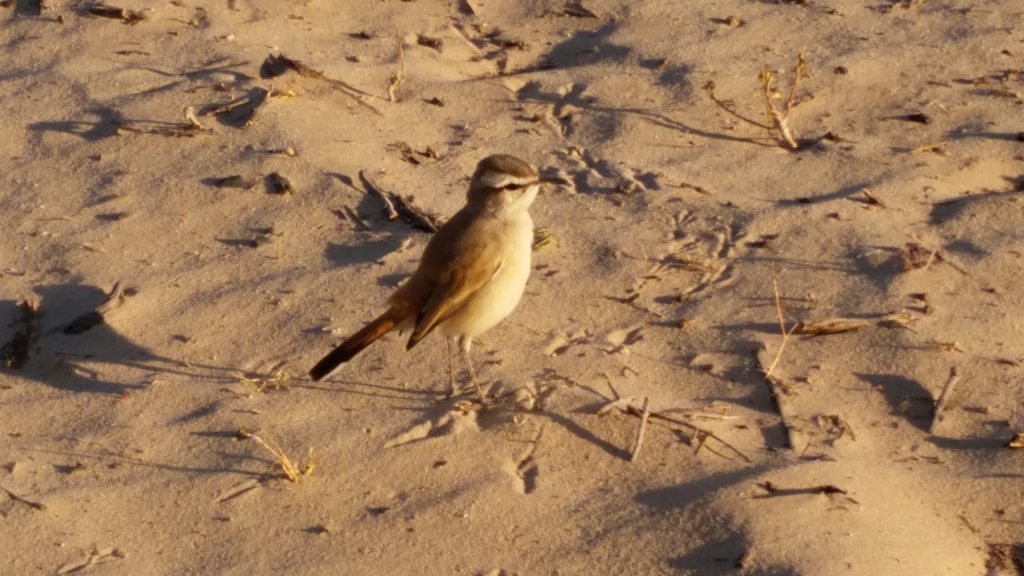 One thought on “Out of the desert, briefly”