I was up just after 6am since it was such a terrible campsite. I topped up the clutch fluid (why haven’t I replaced the clutch slave?). I headed out the way I had come in. I stopped at a school and asked the teacher which way was Mapai, and he sent me on another 15km down a 4wd drive track that ended at Mapai. I stopped about 10km in and had breakfast in the sun.

At Mapai I looked for someone to sell me a sim. Firstly I found an ATM, where I withdrew what I thought was $A125 but actually turned out to be about $A10. I was very confused with the exchange rates. Anyway $A10 was plenty to get me a sim, and a very helpful seller (Arlindo on Whatsapp +258 87 343 4345) got me set up with a sim, programmed my phone, and even answered questions later on Whatsapp.

I drove down the road to park out of town and use the internet, and make sure it was working properly. The it was of to the service station to top up my fuel. Five attempts to pay with 4 different credit cards, and debit cards I finally paid them. Diesel is about $A2.10 a litre. I then went back into Mapai and tried to get a proper amount of money out, and with about 3 attempts I was finally successful.

Then I headed out of town. About 8km out I realised I had forgotten to stop and apply online for my Malawi e-visa. So I turned back a couple of kms, took a side track, reversed in meaning to stop for lunch first, and bang – I blew out my rear left tyre. Split in the sidewall, totally destroyed, even the inner tube. This is the hardest tyre to remove because of the bar that acts as a step, which has to be removed. It is also very hard to jack up when the tyre is totally flat. It takes a while. I decided to replace the tyre with a new tyre I was carrying on the roof. This was a mistake. I had to split the rim, and I was a bit out of practice. I struggled to get the new tyre on. During this whole process I was slowly gathering an audience of kids. At the end I had nearly 30 kids watching me, I mean I was the best entertainment in town. Of these 30 kids several were coughing. To go back a bit in time, the sim seller in town had a mask around his neck. I asked him why he had a mask, which he said ws sort of required (the Police were wearing masks). I asked him if everyone was vaccinated, and he laughed – nobody was vaccinated. So back to the tyre fixing I am surrounded by kids, absolutely none who had been vaccinated against Covid. So I decided the daylight was fading, and the Covid risk was rising, so I got the rear spare off, put the partly assembled new tyre on, got one of the kids to do up the bolts, and high tailed it out of there. 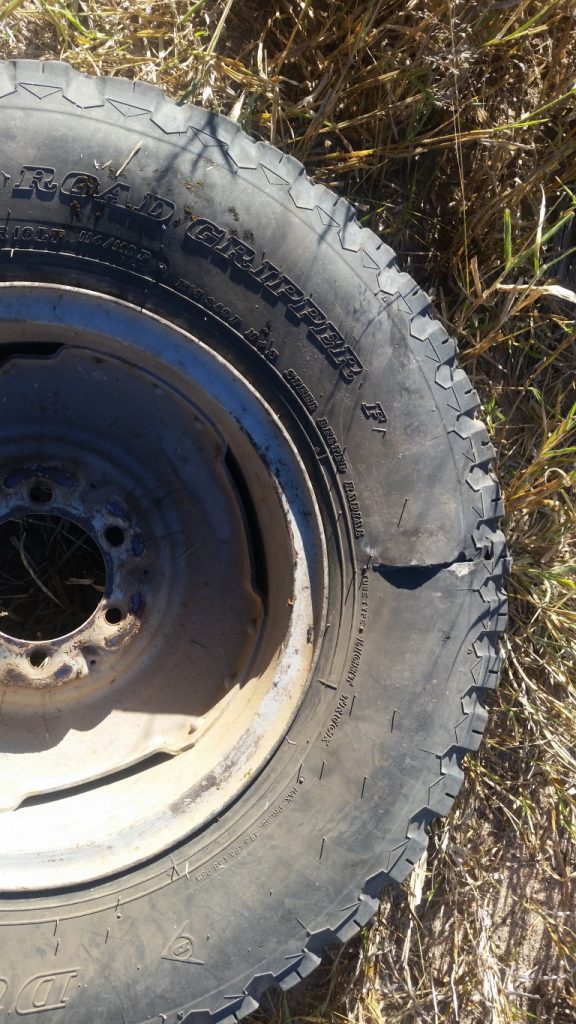 It was 28km in fading light to a sand quarry that Lilli (lilli-to-go.com) had put on iOverlander 3 years ago when she travelled this way. So I headed up the rough road, and got there just before it got dark. Nice campsite.

One thought on “West of Mapai to Lilli’s Quarry”